hide
hide
No announcements have been posted yet for City of Birmingham Swimming Club. 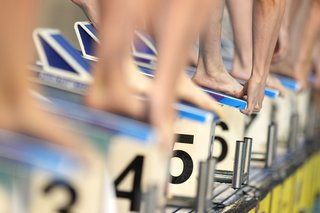 The County Pathway is aimed at developing the best 11-year-old swimmers from the County Championships and is the start of the journey on the British Swimming, Elite Swimmer Development Programme. The Programme consists of a series of pool technique sessions, parent and swimmer workshops and land training all focused on refining skills, technique and general awareness to support the athletes improve all round performance.

Good News the following have been selected to attend the 3 pathway days in Warwick.

Swimmers are selected to participate in the Regional Development Programme. Selection is based on the highest rankings achieved at in the competition.

Dates: Between September and December 2019

The swimmers who have been selected to represent COB are:

Congratulations to all selected swimmers, keep up the good work! We were also represented on the coaching staff with Jamie Fowler. Well done Jamie!

The British Olympic Association has confirmed the 44 athletes selected to represent Team GB at the Baku 2019 European Olympic Festival (EYOF), which includes 16 swimmers. One of those swimmers is Ellie Sibbald-Perkins. * Congratulations and good luck..*

European Youth Olympic Festival is held under the patronage of the IOC, and is the pride of the European Olympic Committees with 25 years of tradition. EYOF is the first top European multi-sport event aimed at young athletes aged 14 to 18. There is a winter and a summer edition, which take place in two-year cycles, in odd-numbered years. The EYOF belongs to the European Olympic Committees (EOC).
The event takes place under the Olympic flag, and is rich with Olympic traditions: from the burning flame to athletes’ and officials’ oaths. It is at the EYOF that many of Europe’s inspiring sports stars of tomorrow take their first steps on the international stage. And while some may enjoy EYOF as a stepping-stone to Olympic greatness, all who participate take home friendships and experiences to last a lifetime.

The EYOF symbolically unites the youth of Europe in one Athletes’ Village. It is a gateway to the Olympic Games, with many medallists having gone on to win medals at an Olympic Games, and gives top young athletes a first taste of what an Olympic event is like, at the same time encouraging more youngsters to practice sport and lead a healthy lifestyle.

The 2019 Sette Colli International Swim Meet will serve as a major pre-Worlds championship event, attracting huge names from across Europe and the world.